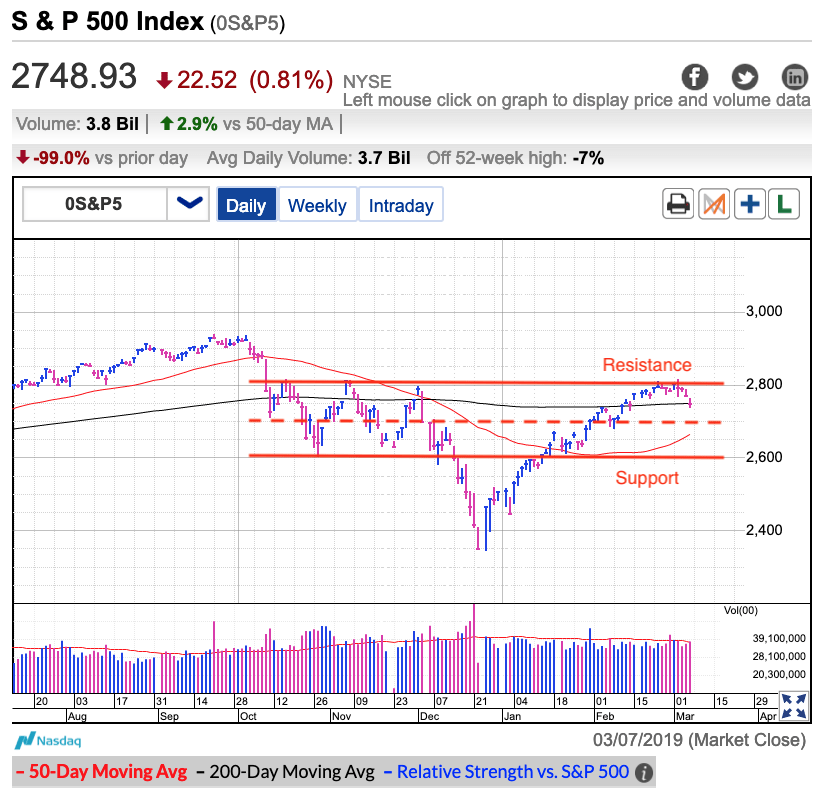 Thursday was another tough session for the S&P 500 as it lost ground for the fourth day in a row and seventh out of the last eight. While the initial down-days were trivial and more sideways than down, the last few have started to add up and we now find ourselves at the lowest levels in nearly a month. This leaves us 70-points under Monday’s opening highs and is quickly on its way to being the biggest pullback of the year.

But none of this comes as a surprise to those of us who have been paying attention. Two weeks ago I wrote the following after the market finished higher nine out of the previous ten days:

“While almost everyone loves calm climbs higher, rather than be lulled into complacency, we should be getting nervous about what happens next. The market finishes higher 53% of trading days, meaning it falls the other 47%. If a person believes in reversion to the mean, and they should, expect this string of up-days to be offset at some point by a string of down-days.”

Barely two weeks later and we’ve strung seven out of eight losing days together. Who would have thought???

But now that we’ve given up a big chunk of February’s gains, the question is what comes next. Even though this is quickly becoming the biggest dip of the year, it still has a long ways to go before it qualifies as a legitimate pullback and even further if it wants to match the intensity of this year’s strong start.

The market loves symmetry and that means big moves in one direction (last fall’s collapse) are matched with equally large moves in the opposite direction (this year’s epic rebound). If these oversized gyrations continue, there could be a lot more downside over the next few weeks.

We are currently challenging, and finding support, at the 200dma. If that fails, then 2,700 is the next meaningful level. After that, maybe 2,650…..but more likely 2,600. If we fall that far, most likely we will tumble under 2,600 support before finding our footing. I’m not predicting that we fall that far, just pointing out that it is a very real possibility.

The goal isn’t to predict the future down to the day and dollar, but to understand the odds and be prepared for what is coming our way. It is a lot easier to sit through a dip and react rationally when we know what is coming. This allows us to craft our trading strategy with a clear head and not overreact and make poor decisions like everyone else in the crowd.

My preferred way of approaching these situations is selling and taking profits early. While other people are sitting through this weakness wondering if they should sell or keep holding, I’m looking at the market with a clear head and waiting for a great dip buying opportunity. When they’re getting scared out, I’m jumping in. If most people lose money in the market, shouldn’t we be doing the opposite of most people?

Want to join the discussion?
Feel free to contribute!